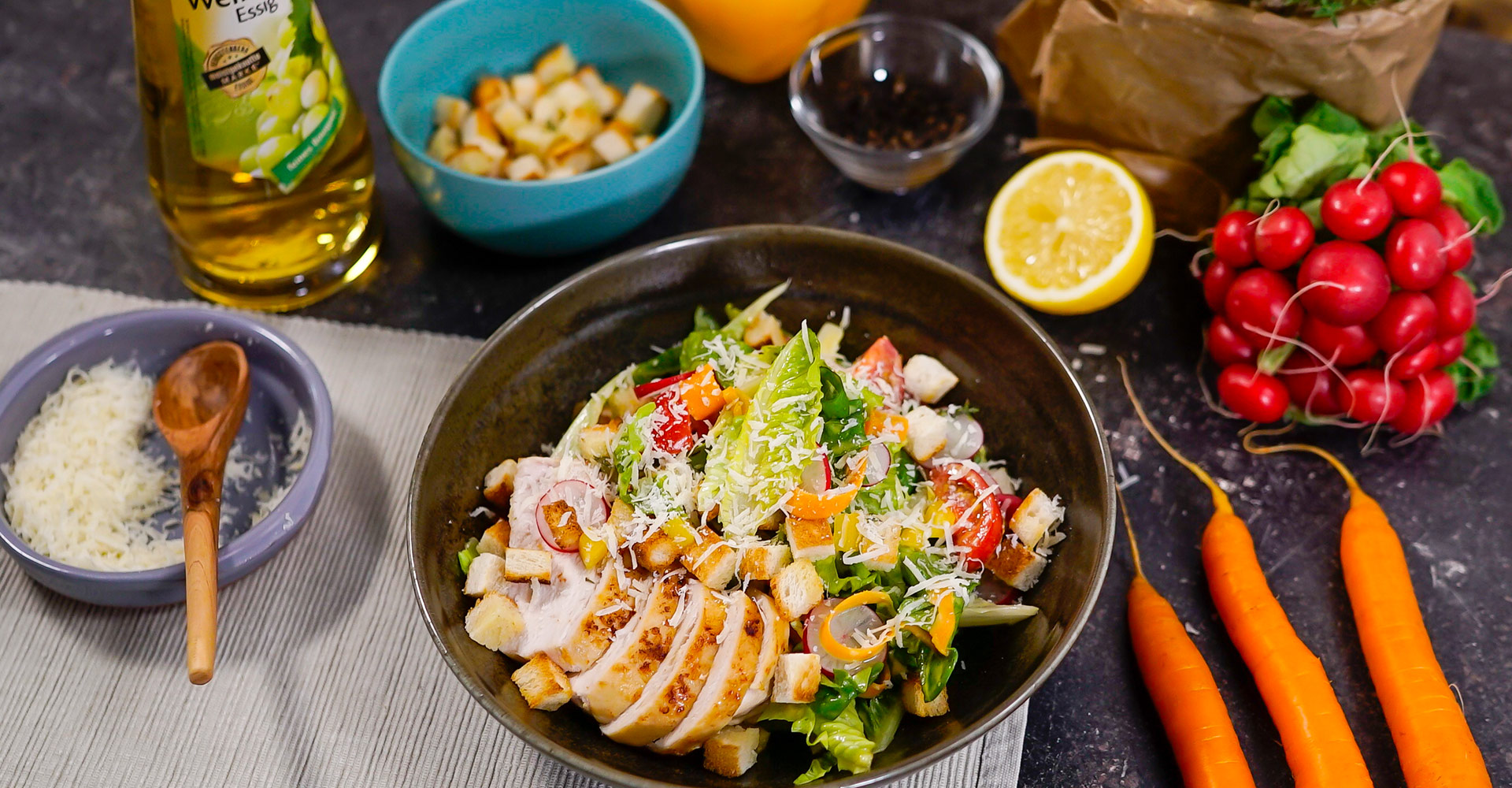 Caesar Salad – an absolute classic and a popular favourite

Heat up the oven to 180°C (heat from above/below). Wash the yellow pepper, the radishes and the tomatoes thoroughly and cut the vegetables into small cubes, slices and wedges. Wash the Romaine lettuce, spin it dry and cut it into bite-size pieces.

Tip: The green leaves of the radishes can also be eaten and should not be thrown away. The leaves taste slightly spicy and can be used to brighten up a salad.

Cut the crusts off the bread and then cut it up into evenly-sized 1 cm cubes. Spread out the bread cubes on a baking tray and scatter them with little flakes of butter and sprigs of thyme. Roast the croutons for around 5 minutes in the oven, until they are golden brown.

Tip: You can use the leftover bread crusts to make dumplings, for example.

Separate the egg and then put the egg yolk into a bowl. Add the mustard, white wine vinegar, grated lemon zest, salt and freshly ground black pepper and stir together well. Slowly add the oil, whilst constantly stirring, and keep going until the texture starts to change. When the dressing has reached a smooth and thick consistency, add 40 g of grated parmesan.

Tip: You can keep the egg white in the fridge and use it the following day, for example to make scrambled eggs.

Tip: To save time, you can cut the chicken breast in half before frying. This will reduce the cooking time by a half.

Mix together the cut-up vegetables, the Romaine lettuce and the salad dressing and then cut the chicken breast into narrow strips.

Tip: For extra flavour and taste, try adding anchovy fillets. Simply cut up the anchovies into small pieces and mix into the salad.

Arrange the salad in small but deep plates and garnish the finished salad with a handful of the roasted croutons and the fried chicken breast.

6 slices of bread suitable for toasting

A couple of sprigs of thyme

Grated zest of half a lemon

The history of the Cesar salad

This dish doesn't actually owe its name to the famous Roman Emperor as you may have thought, but rather to a restaurant owner who was called Caesare Cardini. Back in 1925, on the American national public holiday, he found that his restaurant close to the Mexican border was suddenly extremely busy. Unfortunately Mr Cardini hadn't stocked up with enough provisions to cope with the rush. So he was forced to make a virtue out of necessity: Cardini used what he had available and created the Caesar Salad. His guests loved it.

At first glance, Caesar Salad looks rather purist –light green Romaine lettuce, a white salad dressing, a handful of grated parmesan and some croutons. But with a bit of culinary creativity you can make your Caesar Salad really eye-catching. After all, we have an advantage that Mr Cardini didn't have – time to go and buy the ingredients. As is the case with this version with a home-made salad dressing and lots of brightly-coloured vegetables such as radishes, carrots and yellow pepper. And of course a wonderfully crispy chicken breast. It doesn't just look good, it tastes great too – try it for yourself! 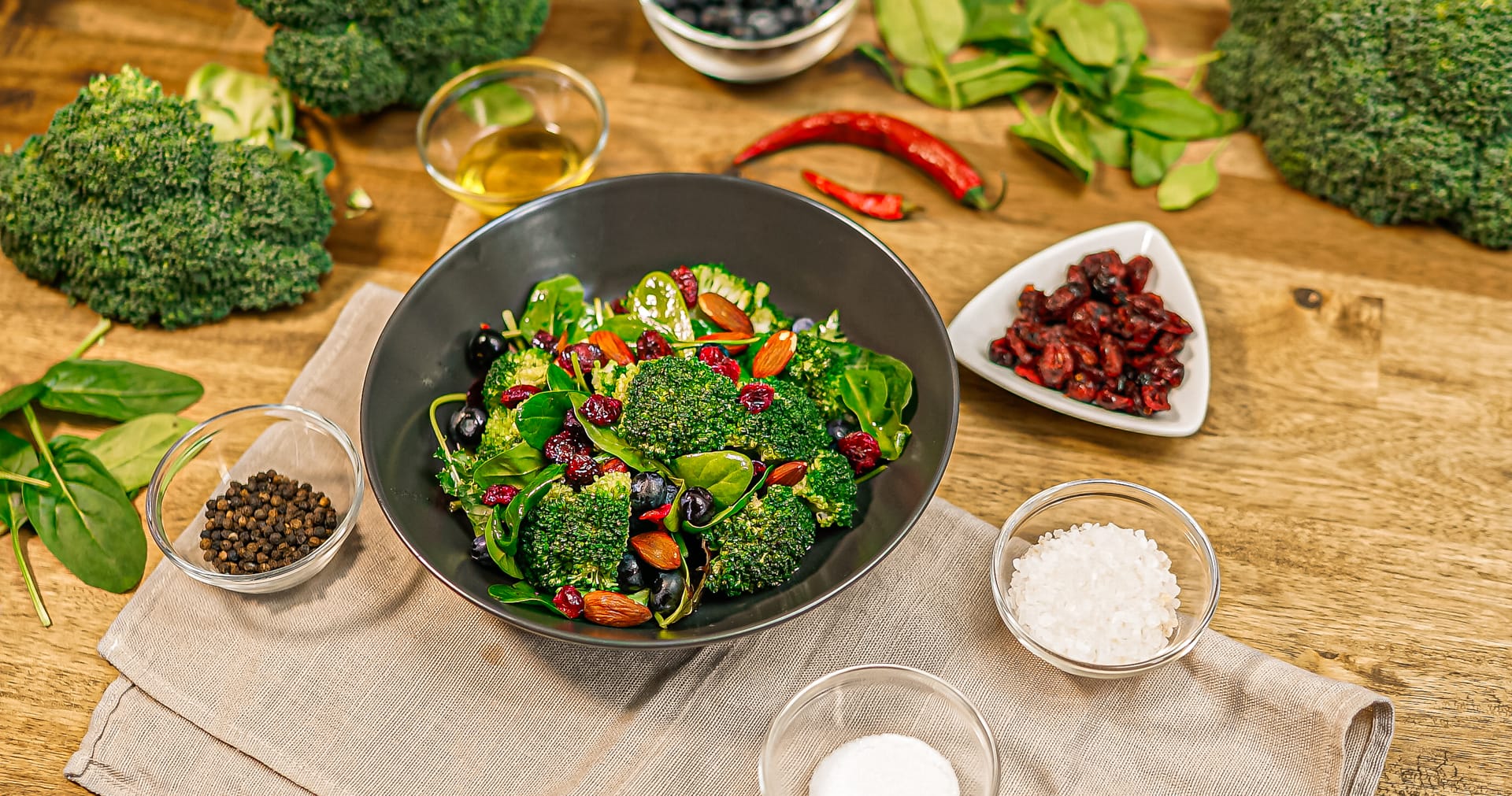 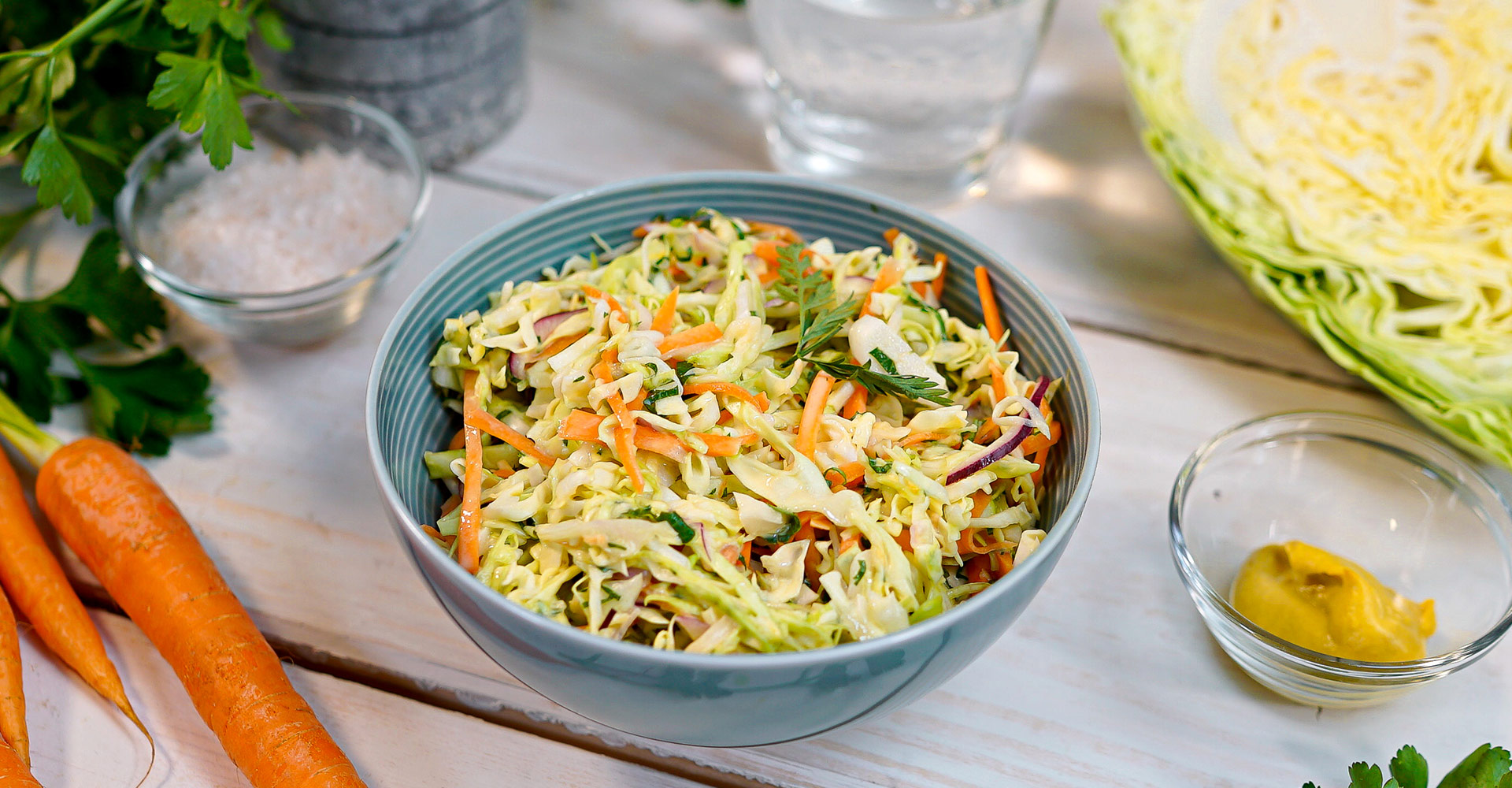 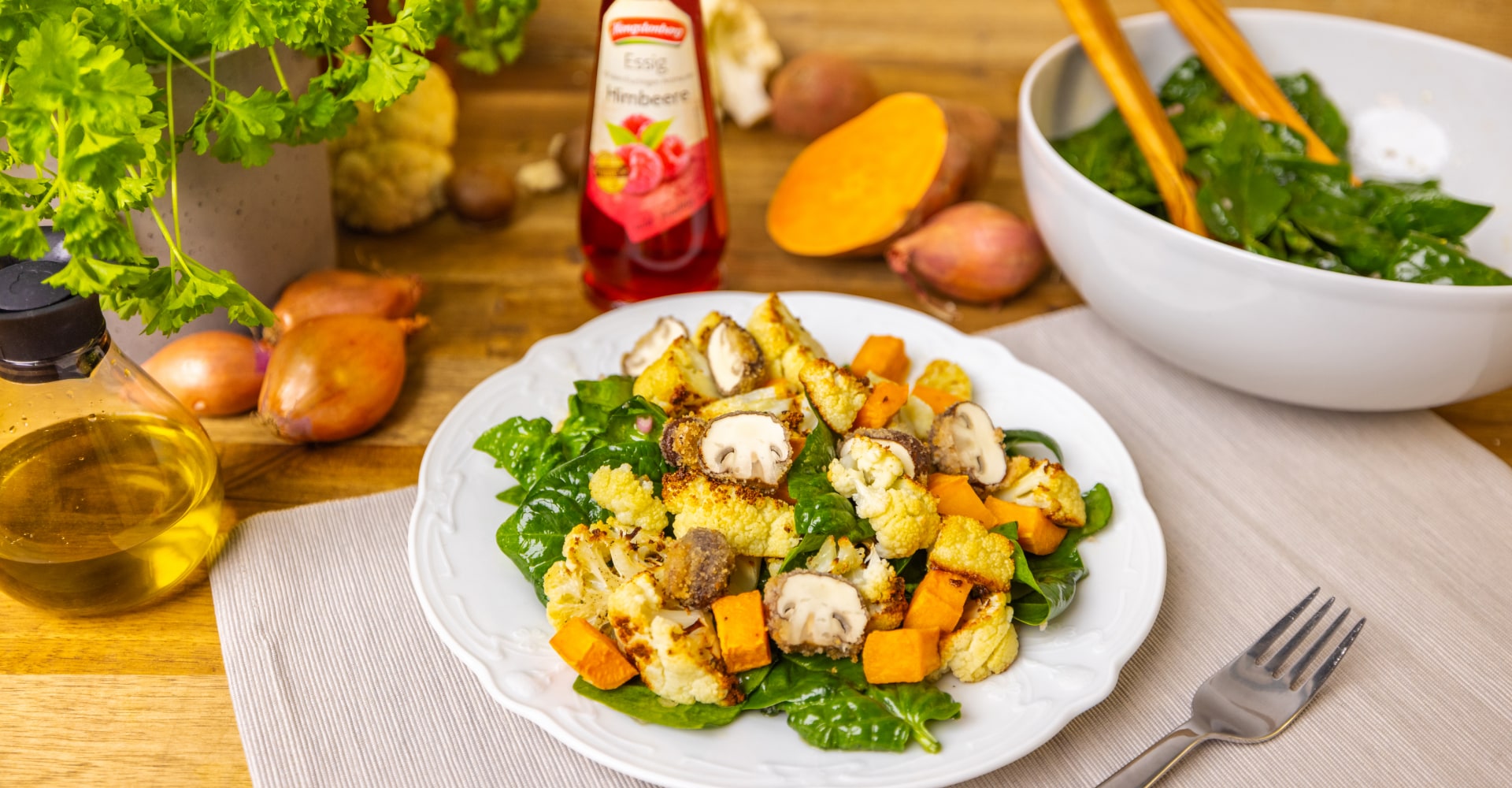